A Glimpse Into Sacred Geometry

Sacred Geometry and Its History

Sacred geometry is essentially the study of various shapes and their spiritual meaning. It can be applied to forms, numbers, symbols, and patterns seen throughout the world. The spiral of a snail’s shell, the geometric patterns of snowflakes, and the branches of trees are all examples of sacred geometry. However, sacred geometry is also thought to exist beyond the naked eye, both on a cellular level and in the orbiting planets and stars.

The idea that the universe follows an intricate equation dates as far back as ancient Mesopotamian and Egyptian cultures. Mesopotamians used geometric calculations consisting of trapezoids to track Jupiter, while Egyptians used geometric shapes to gather the Universe’s harmonic and beneficial natures.1 2 Sacred geometry received more attention centuries later in ancient Greece, where it was popularized by philosophers such as Plato who used it to create the platonic solids.

Jemma Foster, author of Sacred Geometry: How To Use Cosmic Patterns To Power Up Your Life, explains sacred geometry in a nutshell by stating, “Rooted in its nature is the understanding that nothing is in isolation; everything is connected.”

The Basics of Sacred Geometry

Geometric shapes form the foundation for everything we perceive in the universe with our five senses. These shapes are pervasive and ubiquitous. Their designs and patterns aren’t just something we see – they also form our human composition. This makes sense, after all, for we are part of the universe.

The connection we have to sacred geometry is why we are sometimes attracted to certain forms of art or why we identify with various shapes or symbols more than others. The designs resonate with each person differently, because geometric shapes and symbols have certain effects on our minds. Sacred geometry has influenced a multitude of theories throughout the centuries.

Common Shapes and Their Meanings

In sacred geometry, triangles are thought to symbolize balance and harmony. This three-sided shape can also be related to the body, mind, and spirit: if it has an upward facing point, it is known to indicate elevated consciousness. When pointing downward, triangles are associated with feminine energy and reproduction, as it resembles the womb space. The Star of David, for example, has two triangles with points that face both upward and downward symbolizing perfect harmony.

Circles represent a never-ending loop due to lacking a beginning and end. As such, circles in sacred geometry can be thought of as a symbol of oneness. The idea of this never-ending shape is demonstrable and can be observed in Pi (𝛑), or the ratio of the circumference of a circle to its diameter. Pi is an irrational number that goes on forever, never repeating.

Squares represent practical and solid energy. Envision the base of a pyramid – it is a square. This shape can be thought of as foundational and dependable, known to be stable, grounding, and safe. A square has four sides – a mystical number relating to the 4 elements, an indicator of essential elements relating well to each other in harmony and balance.

Common Symbols and Their Meanings

The Flower of Life

The flower of life is the name given to a geometric flower-like pattern that consists of mostly evenly-spaced and overlapping circles around a central point. The name was given to this symbol because it’s believed to contain the patterns of time, space, and all creations. It also contains the five platonic solids meaning that the symbol models all realities and possible creations of both natural and man-made elements. A few of the natural elements that can be found in the flower of life are snowflakes and sunflowers.

The flower of life is believed to have the power of unlocking memories that are present deep within us. It is also considered a powerful symbol because it activates energy coding in the brain that helps a person connect with their light body. Additionally, the interlocking circles that form the flower of life are considered the Blueprint of the Universe.

Consisting of two interlocking circles whose centers exactly touch, vesica piscis is considered the symbolic representation of shared vision, understanding, or common ground between two equal individuals. The shape in the center of the vesica piscis, which is formed by the interlocking circles, represents the human eye and highlights the spiritual concepts of “seeing eye to eye” and that “eyes are the mirror to the soul.” It is in these meanings that the symbol was used by many Renaissance artists.

Another viewpoint of the vesica piscis is that the overlapping circles signify the connection between the physical and spiritual world and the shape in the center represents fish or a fish bladder, which was considered sacred by the early Christians. This is why the vesica piscis can be found in an abundance of churches today. 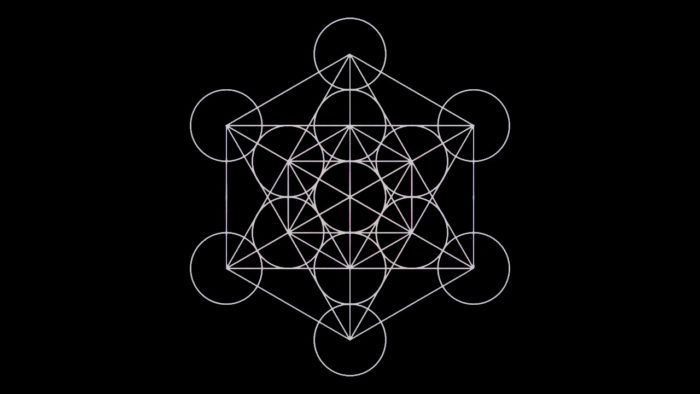 Metatron’s cube is a geometric symbol that will fascinate you with both its visual appearance and background story. According to belief, the angel Metatron created Metatron’s cube out of his own soul. The symbol is made up of all the shapes created by God, which are the platonic solids; considered to be the base material of all things in the universe.

Many experts suggest that the cube in Metatron’s cube is the representation of our bodies in the three-dimensional world and the sphere inside the cube represents our souls. However, according to theories on the symbol, it is a way for God to convey knowledge to humans, along with deriving from the tree of life. For these reasons, the symbol has been used throughout the centuries as protection against evil spirits and demons.

Almost everyone has learned about Pi in school, but relatively few curriculums include Phi, or the Golden Ratio, perhaps for the very reason that grasping all its manifestations often takes one beyond the academic into the spiritual just by the simple fact that Phi unveils frequent constants that apply to so many aspects of life. Both Pi and Phi are irrational numbers with an infinite number of digits after the decimal point.

Phi, or ɸ (1.618…), is the ratio that results when a line is divided in one very special and unique way. To illustrate, suppose you were asked to take a string and cut it. There’s any number of places you could cut it, and each place would result in different ratios for the length of the pieces. There is one certain point, though, at which the ratio of the large piece to the smaller piece is the same as the ratio of the whole string to the large piece, and at this point, the ratio is 1.618 to 1. This is the Golden Ratio.

The Golden Ratio is also found in geometry, appearing in basic constructions of an equilateral triangle, square, and pentagon placed inside a circle, as well as in more complex three-dimensional solids such as dodecahedrons. Interestingly enough, Phi appears throughout the human form; in the face, body, fingers, teeth, and even our DNA. It seems that Phi is hard-wired into our consciousness as a guide to beauty. For this reason, Phi is applied in both facial plastic surgery and cosmetic dentistry as a guide to achieving the most natural and beautiful results in appearance. 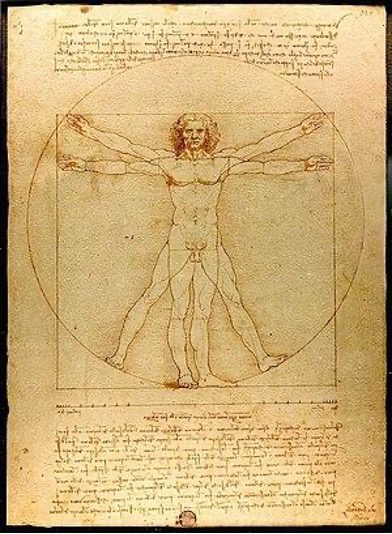 The Vitruvian Man is considered Leonardo da Vinci’s most famous and widely reproduced folio. This representation, which is said to lie heavily with the Golden Ratio, objectively reflects the human body’s proportional basis. It is historically associated with the Roman architect Marcus Vitruvius Pollio, who explained the principle in his book De architectura at the beginning of the first century AD. This figure has been recurrently used to illustrate the Renaissance ideal of a man as a symbolic microcosm, thus praising his role as the center of the universe.

Leonardo da Vinci used a series of notes as standards for the proportions of the human body, which were:

This theory explains to us that in ancient times, the proportions 1:3, 1:4, 1:6, 1:8, and 1:10 were appropriate to man.3 Looking at da Vinci’s diagram, Vitruvius begins with a focal point, which is the navel. All the elements in the folio are measured from this point forming circles and squares. According to this theory, the human body is rooted in symmetry, which is why architecture has also utilized the proportions in the Vitruvian Man to acquire perfect symmetry.

Sacred geometry is the essence of everything around us, including both materialized and immaterialized things. In some cases, we can see these manifestations in 3D, such as with leaves and crystals. However, most of the time, sacred geometry is the invisible force that drives the world. Each shape carries a powerful frequency that has a healing and soothing effect on our whole being.

Though not scientifically proven, there are a few sacred geometry healing practices you can try at home:

You can look at crystals as spiritual sacred geometry actualized in the physical realm. They carry healing vibrations that can cleanse your aura and stimulate healing processes. As a result, they can help you reach higher levels of consciousness and release whatever is holding you back.

To use crystals and sacred geometry together, you should first choose a crystal for its healing properties. For instance, if you’re looking for an energetic cleanse, clear quartz is an ideal option. If you feel lost or emotionally burdened, try lapis lazuli.

Here are some suggested tips to create your own healing ritual: 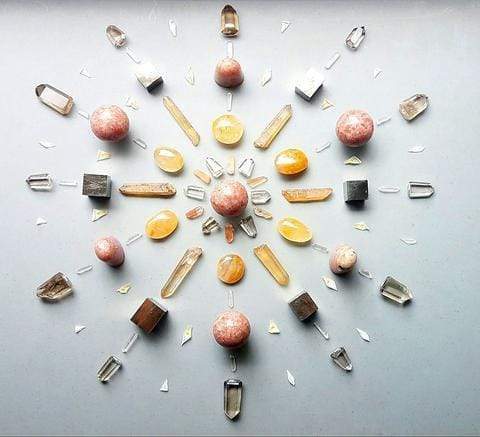 To meditate with sacred geometric forms, simply find a calm and quiet area to close your eyes and relax. Instead of the usual mantra of words, though, you’ll be focusing on a sacred geometric shape.

Tetrahedrons, cubes, and pyramids are excellent beginning points when meditating with sacred geometry. These shapes can help introduce your current state to the healing process, which will make for an excellent meditation session. As you progress through your sacred geometry meditation journey, you can begin to add more shapes for various other benefits.

Here is a simple pyramid power meditation you can try:

Sound is also a form of sacred geometry. In fact, the sounds you hear every day, such as your voice, are auditory formations of these healing patterns. This means that by using healing frequencies and sounds, you can rewire your energy field and rejuvenate all aspects of your being.

You can do this by listening to specifically created sounds that emit vibrations, which affect the physical realm. This means that each sound frequency creates a geometric pattern that your body recognizes.

Try listening to these sacred vibrations:

Sacred geometry can be seen on a macro and micro level throughout history, nature, and man-made architecture. Learning about the mystery and meanings behind various forms can help enhance your connection to spirit, widen your acceptance, and broaden your mind to new concepts and ideas. It can help expand your appreciation for the universe at large while also grounding you for improved balance and harmony.

All the world is founded upon geometrical concepts with shapes that vibrate in and among us. According to Foster, “When we exist in accordance to these sacred principles, we are in a state of abundance and receptivity – we become energetic architects and empowered co-creators of our reality.”4

Were you aware that sacred geometry was so pervasive in our world? Have you tried healing with geometric shapes before? Let us know in the comments below.